Lego Harry Potter sets have always been a big hit, and even though the boy wizard story came to an end years ago, we still love the joy of putting together a giant Lego Hogwarts Castle, or great little Hogwarts Express set.

And with new Lego Fantastic Beasts and Where to Find Them sets coming out in the run-up to the latest film, expect these to be some of the hotter Lego gift sets for Christmas in 2018 – especially the new Lego Hogwarts Great Hall, which is going to be a smash hit for certain.

If you’re wondering what sets are available for building a wonderful wizarding world of your own, let’s dive straight into the coolest Lego Harry Potter sets you can buy!

The new Lego Hogwarts is a huge (69x43x58cm fully built) recreation of the movie version of the castle, all more or less to scale with the 27(!) included microfigures (teeny Lego characters even smaller than the usual minifigs). The last big set built to microfigure scale was the awesome Lego Saturn V rocket, and this looks even better.

The film-mimicking model has everything from the Great Hall to the Chamber of Secrets, Dumbledore’s office, Room of Requirement, and loads more cameos from the series, as well as separate Hagrid’s Hut and Whomping Willow areas. And yes, the staircases move.

The figures include assorted students, teachers, villains and a set of Dementors, and it comes with a scale Aragog the spider and dragon for good measure. This is the ultimate Lego set for Harry Potter fans, bar none. 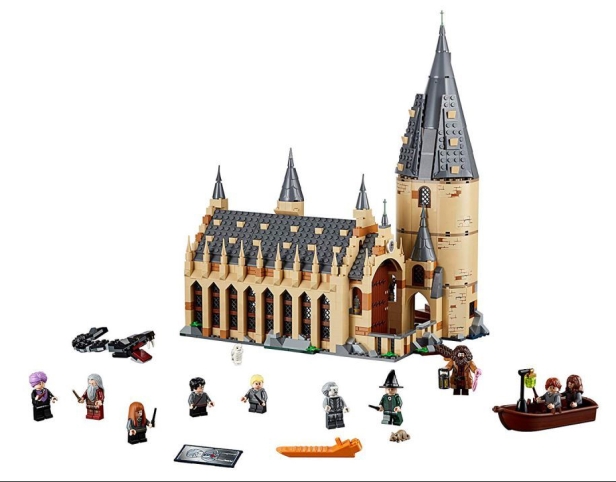 Don’t have space for the giant Harry Potter Hogwarts Lego, but love the idea? Scale it back with the Great Hall set, which has a similar movie-ready look but is a fraction of the size (and price). It includes 10 minifigs, including Hagrid, Nearly-Headless Nick, and more students and teachers. As well as a recreation of the Great Hall, you get a tower with a moving staircase and Mirror of Erised. There’s even a Basilisk and little Fawkes figure.

Start your Hogwarts journey at, well, the start with this lovely recreation of King’s Cross Platform 9 3/4 and the Hogwarts Express. The platform has a moving section of wall for the minifigs to pass through, naturally, as well as teeny Lego Daily Prophet newspapers. The train itself looks great, but you can also pull away the side and roof of the carriage to create a little Express playset. You even get a minifig of Trolley Witch, everyone’s favourite nameless sweet salesperson, and where else are you going to find that?

Create the excitement of magical match day with this sharp little set. Aside from the adorableness of it coming with Lego-ised Quidditch gear – including quaffle, bludgers, Golden Snitch and characters in their team gear on broomsticks – you get a set of goals complete with a controllable clear stand to wobble your plastic Oliver Wood in place for clutch saves. There’s even a way to fire bludgers into the air, which seems excessive, but makes for a pretty complete playset. Each house gets its own support tower, and the Slytherin one has some pop-up fire, for recreating pyromaniac-based movie moments.

If you’re looking for your Lego Fantastic Beasts and Where to Find Them fix, we’ve got this fantastic set for you… In a very cute bit of theming, you build Newt’s case here, which folds out into a playset with areas for taking care of the buildable animals contained within. It comes with four movie figures and five creatures, giving kids loads of scope for replaying or remixing their favourite movie moments.