In 1981, a renowned Indian guru Bhagwan Shree Rajneesh, purchased a vast tract of land in Wasco County, Oregon, with the goal of shaping the remote valley into the centrepiece of a religious movement focusing on dynamic meditation, free love, harmony and the development of The New Man.

And so begins a saga that unfolds over six increasingly unimaginable episodes in Netflix’s riveting documentary series, Wild Wild Country – a slice of partially forgotten history in which real life just keeps getting more and more outlandish and implausible. 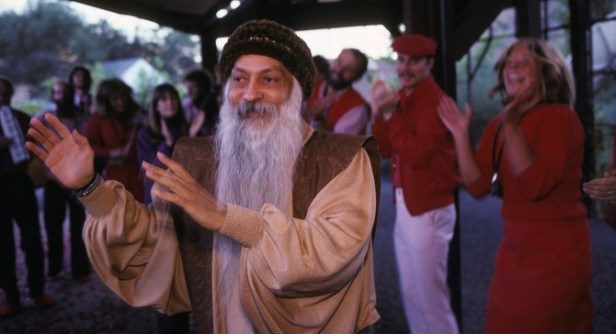 The story begins with archival footage of hundreds of men and women, clothed completely in red, making their way into the small town of Antelope in the state of Oregon in 1981. These intriguing visuals are interspersed with interviews of old-time residents of Antelope, recounting the shock and horror they experienced seeing their little hamlet with a population of only 40, being taken over by a commune consisting of followers of Bhagwan Rajneesh, more popularly known as ‘Osho’.

Directors Maclain and Chapman Way set the tone of the series with a riveting introduction about regular folk whose lives were dismantled, and then quickly shifts focus to ageing members of the commune, now settled in different parts of the world (Europe, America, Australia). The directors have some brilliant, never-seen-before footage at their disposal, which they expertly mesh with aesthetically-shot interviews and a roaring background score.

As in life, there are two diametrically different versions of events guiding the narrative here, and both are presented with equal care and sensitivity. There’s enough drama and mystery packed in Part 1 to get you hooked to the premise, and by the end of Part 2, you aren’t quite certain, yet, where your sympathies lie.

A feature of all great multi-part documentary series is that the bigger picture evolves over the course of the show. Wild Wild Country excels in taking viewers on a similar rollercoaster ride, reeling you in with little bits of information before pulling the rug out from under your feet, then setting you up for the next twist.

Wild Wild Country isn’t just about the formation, domination and eventual disintegration of a cult; instead, it is a study of the influence of power, the anatomy of religion, and how society responds to an idea – any idea – it isn’t comfortable with. The Way brothers achieve this largely by keeping the focus away from Rajneesh himself, instead throwing the spotlight on his followers, mainly Ma Anand Sheela – the ‘right-hand man’ in his organisation. Through the course of the series, we see Sheela transform from an avid, starry-eyed disciple to a confident, ruthless leader in her own right, and her journey anchors the show.

Sheela is willing to use all manner of electoral and civic maneuvering to allow her community and movement to spread, and if those legal recourses fail, Sheela may be prepared to take more aggressive steps.

Interviewed more than 30 years after the events of the series, Sheela, now living in Switzerland, is still blunt, combative and highly suspect.

Although the story of Wild Wild Country is set up as a clash between the Rajneeshees and Antelope, this conflict is just a micro view of a particular American paranoia regarding religious and cultural difference in the early ’80s. The story gets bigger and bigger as the expanding Rajneeshee city attracts the attention of state and national officials, and we’re forced to ask ourselves questions about the difference between cult and religion, and the threat of the unfamiliar.

Almost everything we’re told feels like spin or urban legend and the inability to fully believe a single character produces an unsettling ambiguity, denying the basic pleasure of “answers.”

Throughout it all Rajneesh himself remains an elusive figure – increasingly separate and removed from his legion of devotees, and perhaps one might even observe, quite removed from the realities of the world itself – ultimately more of a walking contradiction than any earthly embodiment of God.